1.  Mobile is where your users are

The worldwide growth of the mobile Web over the past couple of years has been stunning, propelled by the ubiquity of smartphones with large touch-enabled screens and excellent Web browsers.  According to a September 2014 report by StatCounter, “mobile usage in the US has grown by 73 percent over the last twelve months” and growing every day.  Nearly a quarter of all US internet traffic is now from mobile devices.  Furthermore, depending on the demographic your organization serves, those numbers may be vastly understated:

In January 2014, CNN reported that 40% of visits to CNN.com in 2013 came from mobile devices.  This announcement came shortly after ESPN, the BBC and Buzzfeed all announced that mobile traffic had matched or even exceeded desktop Web traffic at times in 2013.  Note that these numbers are already a year old at this point and ESPN.com recently announced that 55% of its unique users came from mobile devices in September 2014.

2. Mobile internet use exploding among minorities

In the US, minorities are increasingly accessing the internet on their mobile devices to access information, for advocacy and for civic engagement.  While studies have shown that minorities have trailed whites in terms of home broadband adoption, this trend does not hold true for mobile devices.  According to a 2013 Pew Research study, 67% of Hispanics and 72% of black users used cell phones to access the Internet compared to 56% of white users.  A May 2014 report by Experian also found that “among smartphone owners, Hispanics are 17 percent more likely than non-Hispanics to say that they access the Internet more through their phone than through a computer. In fact, 45 percent of Hispanic smartphone owners are mobile-dominant when it comes to going online compared with 38 percent of non-Hispanics.”

The adoption of the mobile Web is a worldwide phenomenon and in both developed and developing countries.  In many developing countries, the majority of internet users use only mobile devices because of limited access to PCs or the wired Internet.  For example, surveys have shown that 70% of internet users in Egypt use only mobile devices to access the internet.  In India and South Africa, those numbers are 59% and 57% respectively.

4. Your emails and social media posts are being viewed on a mobile device

It’s vital to recognize that all outreach to the community you serve, whether marketing, education, fund-raising or support-related, should be accessible on desktop and mobile devices.  Mobile-enabling your website is critical but the initial point of outreach such as an email must also be mobile-friendly because one out of two emails are being opened on a mobile phone. 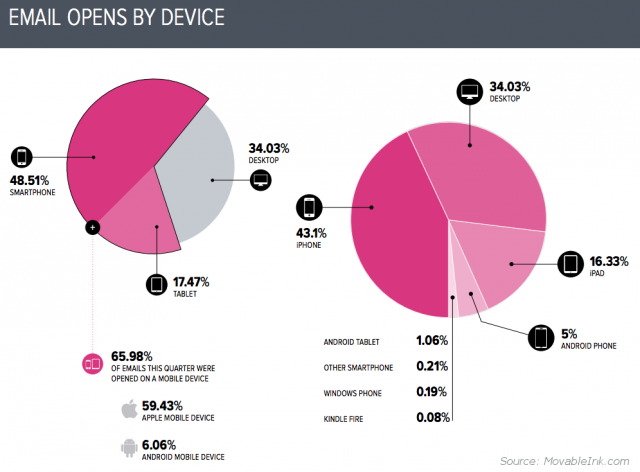 You are asking users to not only spend their precious time to read your email but to also take further action to donate their money, time or attention.  So remove the obstacles in their way.  Make it easy for them to read your emails, regardless of what device they use.  Make it easy for them to act on the information they just received.  Otherwise, there is a very real and very large cost to you:  A Google report found that as many as 61% of Internet users will leave when they visit a site that is not mobile friendly.

Similarly, if you are trying to connect with users via Facebook or Twitter or other social media, your posts are likely being viewed on mobile devices.  Research firm Sandvine recently reported that one-fifth of all data used on mobile phones is from Facebook and a Q3 2014 report by Simply Measured found that “80 percent of Twitter’s active users are on mobile.”  When these users click through to your website, they will expect a mobile-friendly experience.

Which brings us to the next, and perhaps most important, point:  Make it easy for users to give.

As Generation X and Generation Y users start to represent larger percentages of online users, they are also becoming a bigger part of online giving.  An August 2013 study by Blackbaud found that “nearly two-thirds (62 percent) of Gen Y and nearly half (47%) of Gen X say they would consider giving via a mobile device.” Yet an online fundraising scorecard report conducted around the same time found that “84% of nonprofits’ donation landing pages were not optimized for mobile.”  This chasm between what online users expect and what is being delivered represents a huge missed opportunity in fundraising.  Conversely, organizations that have invested in enabling mobile donations have not only seen significant uptake but have also seen that mobile can both encourage and facilitate impulse giving.

Mobile giving has recently been made much easier by payment processing companies, Apple Pay being the most recent high profile example.  Ebay UK reported that over 66% of Paypal donations for BBC’s Children in Need charity came from mobile.  Similarly, Penny Pritzker, the U.S. Secretary of Commerce, noted in a blog post that “the number of PayPal mobile donations [for the annual #GivingTuesday event] jumped nearly fivefold over the previous year, and the value of those donations increased more than 200 percent.  These are numbers non-profits cannot afford to ignore.

Even if your site looks ‘ok’ or ‘readable’ on mobile browsers, it probably isn’t easy to navigate on a touchscreen.  Mobile design is sometimes misunderstood to mean ‘design for smaller screens’.  However, in 2014, an effective mobile design means designing interfaces for all touch screens that work in obvious and predictable ways:  Touch targets such as menu items, buttons and links should be large enough and with enough space between them to avoid accidental taps; swiping should be implemented in a way that is clear to users and does not interfere with native browser functionality.

In addition to the 260 million plus tablets expected to ship in 2014, more and more laptops are currently being sold with touch screens, including Windows 8 devices and Chromebooks, in many different shapes and sizes.  One global PC maker, Acer, announced in 2013 that 50% of the notebooks it ships in 2014 will have touchscreens.  An 11″ touchscreen notebook user may find the tablet version of a website more appealing than a classic desktop website. For many children, tapping on the screen of a phone, tablet or small notebook is the first way they learn to interact with computers. Kiosks and other devices benefit from touch-optimized design as well. Users are already trying to tap on desktop websites, and touchscreen ubiquity is coming.  We expect touchscreen users to become the majority of web users in the near future.

With recent advancements in Web technology, there are different options for how websites can be made mobile friendly.  One option is to develop a dedicated mobile website that is separate from the desktop site to which the mobile user is automatically redirected.  Another option is to redesign your existing website to use Responsive Design which detects that the device being used to visit the site is a mobile device and dynamically reformats the presentation of your web page to be mobile-friendly.  Each option has its benefits and the decision on which one to choose depend greatly on your organization’s specific needs and constraints.

We at netomat, Inc. can answer your questions and help you make the right decision.  We build beautiful websites, apps and social media services that work seamlessly across desktop, tablet and mobile devices.  Our team averages over a decade of experience in mobile, web and social.  We work with clients both large and small, tailoring solutions to fit their specific needs and budget.  Contact us at info@netomat.net and let us help you.